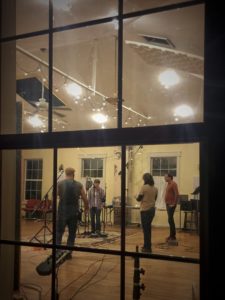 Looks like a heavy-duty planning session. That guy on the right is Jake Belser, owner of Primary Sounds Studios. It was a rare treat to actually have him at the board.

Cari sat down recently to talk a little about the making of “Bad & Better Angels.” This record is decidedly raw and stripped down when compared to her earlier recordings. “I felt like this book of songs was the most exposed, intimate set I had ever put together, and I wanted there to be as little as possible between the listener and the vocal delivery of melody and lyric. These songs are not the result of a songwriter trying to write good songs, but more of an undressing…a tearing of the veil. Folks will know me better after listening to this album…with luck, maybe they’ll know themselves a little better too,” she says. “At the same time, sonically, I wanted to capture the fullness of the duo’s live show sound. That’s why I wanted Rev’s help on this project.” Reverend Peyton of Reverend Peyton’s Big Damn Band, who has built a career making big-sounding records out of sparse, simple instrumentation produces and makes guest appearances on the title track and on “Bound To.” 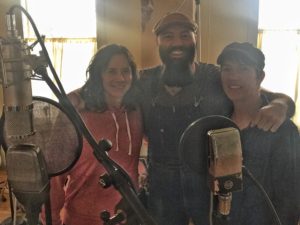 Vintage mics set and ready to go. I’ve never heard vocal tracks sound the way they do through these babies…I seriously can’t stop grinning when I listen back.

In an attempt to ape recording techniques of the past, most of the tracking was done in the sanctuary of an old church using vintage RCA microphones and preamps. The idea was to keep things raw and simple and to stay away from using modern recording “tricks” as much as possible. For example, the “room” sound on the tracks is not from a reverb plugin or effects unit, but from a room mic that is picking up the natural sound of the space. “We wanted this piece to sound ‘of a time’ and ‘of a place,'” Ray says. The instrumentation is also decidedly stripped down. Half of the tracks boast just the duo (vocals, guitar & drums), while the other half only add 1 other instrument (guitar or mandolin). There is no bass on the project…all of the low end is produced by the kick drum and Ray’s thumb as she fingerpicks the guitar or resonator.

When asked how this project differs from those earlier in her career, Cari said, “This is my 4th full-length studio album, but really the first of it’s kind…Dionne (Dionne Ward, percussionist and backing vocalist in “Cari Ray & The Shaky Legs”) and I are primarily touring as this ‘acoustic power duo’ and turning heads as folks try to figure out where all of the sound is coming from, so rather than dragging a bunch of studio musicians in, we tried to make a record that sounded like that…like us.” Laughing, she goes on to say that, “someone came up to us after a show recently and said we sounded like the Americana version of ‘The White Stripes.’ Well, I sure as hell am no Jack White, but I do think we have a configuration that’s an interesting departure from the usual acoustic duo, power trio or 4-piece.” That said, Ray still brings long-time lead guitar player, Chuck Wills, and bassist Jeff Farber in on select shows.

“Bad And Better Angels”, distributed digitally by The Orchard, a wholly owned subsidiary of Sony Music Entertainment, is available for purchase at www.cariray.com and at all major digital retailers. Cari Ray & The Shaky Legs will be touring extensively this summer in support of the new record. Visit the band’s website for the full schedule.