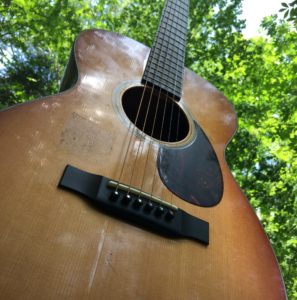 Collings 01 as she was upon return: dirty, cracked top, lifting bridge.

I like stories. Like hearing them. Like telling them. Like making them up. But it’s better yet when a good story actually happens to you. As I left home on a sunny Wednesday morning a few weeks ago, I had no idea the story that was in store for me that day.

It started the Saturday before. Well, actually, like most good stories, it started well before, but we’ll get to that. Let’s see, yes, that Saturday before…I was playing a show at the local winery and my instrument cable gave up the ghost. From rocking to rigor in a spit second. Fortunately, I buy cables that are guaranteed for life. It dies, you just take it in and swap it for a new one. So now it was Wednesday and I was headed to the big box guitar store in Greenwood on the way to an Indy rehearsal to get a new one. Until I decided, at the lat minute, to go to the one on the north side.

As I stood chatting with my pal, new cable in hand, something in the next room caught my eye. A lovely little Collings 01 guitar with a beautiful sunburst. For those who know me well, it’s no surprise that a sexy little guitar drew my attention. But to say it caught my eye is a bit of an understatement, I suppose. The sight of it raised the hair on the back of my neck. You see, it bore a striking resemblance to an identical guitar of mine that was stolen along with a good portion of my music gear when my car was broken into 4 and a half years before.

It was the first boutique guitar I had ever owned. I sold other gear, scraped and saved and finally had enough pulled together to buy it in October of 2011 shortly after my move to Brown County. After several years of trying to become the artist others wanted me to be, that little sweetie was one of the tools I planned to use in my quest to reconnect with my voice and fall in love with making music again. But our affair was short…by February, she was gone.

After apologizing to my buddy for the distraction I headed out to the van with a mind to the next errand. Well, not quite…I was haunted by that guitar. So, after some failed attempts to come up with a serial number, put in a call to Collings down in Austin and they pulled it up from my original warranty card. Just as I was dialing the phone to ask my buddy to compare numbers, the guy walked out, placed the case in the back seat of his Caddilac, and drove off. So that was that…or was it? If he didn’t sell it here, maybe he was headed to another music store to see if he could get a better price. And there were two such stores within a mile radius. Adrenaline pumping and heart racing, I pointed the van toward the first of them and fired up the engine.

As luck, or fate, would have it, I sat behind him at the next traffic light and could tell by his lack of turn signal just where he was bound. I quickly looked up the number and called ahead to the shop. After a quick intro and an odd request, the manager had the serial number and my phone number and I had a promise for a call back in the off chance that we had a match. The light turned green and I followed the caddie across the street, pulling into a spot a few stores down from the music shop. I’m sure I wasn’t as inconspicuous as I hoped in our big tour van, but I wasn’t going far until I had an answer.

10 minutes later, my phone rang and the voice on the other end said. “That’s your guitar.” I was both absolutely and not at all surprised. I didn’t know that was a thing, but it is. Like my outer, every day person couldn’t believe what my inside person had already been completely sure about. So now what? The store manager had no idea what to do in this case as it had never happened before. So I reached out to my friend Paula, who proudly serves and protects on the IMPD force, and once she was sure I had a positive ID and that a police report had been filed, she told me I should call and ask for an officer to be dispatched. The officer arrived, and after a short delay due to the fact that the report was so old it had to be pulled from a retired archive system, he walked out to the parking lot and placed the case in my hand.

CLICK HERE FOR MORE PICS OF MY PRODIGAL GUITAR

As I’ve told this story over the past few weeks, besides being amazed, folks have had a couple of questions. First, they to know what happened to the guy who was trying to sell my little 01. Well, his story was that he bought it off the street a couple of years ago, which is altogether likely, so he’s out whatever he paid or bartered for it. And that’s okay with me, I learned a long time ago that trying to complete the circle of Karma was not my job and have no interest in tainting the joy of restoration with the blight of spite.

The second question is what sort of shape she was in. Well, the not so great news is that she had been allowed to dry out, resulting in a small top crack and a lifting bridge…fortunately fixes quite doable for an accomplished luthier like mine. But like most, this coin has two sides. The great news? Based on the dust, dings, gunk on the fretboard and pick marks on the top, this little baby has been played over the past four and a half years. A lot. She’s obviously had quite an adventure in her time away, and now that she’s back, I can’t wait to coax her into telling me all of her secrets. Oh, I’m also considering advice I’ve been given a number of times since that I go out, straight away, and buy a lottery ticket.