Copy Your Favorite Cat: The Value of Playing Covers

I’m Cari Ray, welcome to For a Song. Recently, the band and I participated in a fundraiser called Tonic Ball, which brings musicians together to raise money for Second Helpings of Indiana. The idea is to put on a show where acts take the stage to play 2 songs by on of the featured artist for that year. The first Tonic was at Radio Radio in Indianapolis’ Fountain Square, and covered the music of Graham Parsons. Now in it’s 14th year, the event takes place across 4 venues covering 4 distinct artists. This year, we were chosen to cover Tina Turner. Now, to those of you familiar with my vibe, Ms. Turner’s songbook might not seem to fall naturally into my wheelhouse…especially not her pop tunes from the 80s. But here’s the thing, as we’ve discussed before, good songs can translate across genres. So, we took the basic melody and arrangement for the two tunes, and from there, turned them on their heads. The end result sounded more like Bruce Springsteen than Tina, but worked for us…and, by all accounts, the audience.

Now some original artist will thumb their nose at playing covers and, yes, I do generally prefer to play my own music. But this is the third time I’ve participated in Tonic, and additionally, playing shows around the region, I always add some cover tunes to the mix. That’s especially helpful when you’re trying to hold on to a crowd of newbies for a 3-hour stretch. But it’s not just about time filler and marquee value, there is  creative value in playing the songs of other folks. In a recent installment, I talked a little about the value of listening critically to the music of other artists. And I’m here to tell you that the value you can glean from that exercise is increased exponentially when you charge yourself with learning…or, better yet, reinterpreting those songs.

And I’m not alone in thinking so. Earlier this year, when presented with his MusicCares Person of the Year award, Bob Dylan gave a 30-minute acceptance speech that was the talk of the entire music community for weeks. It’s a great read, and I’ll include a link to the entire speech on the For a Song page at cariray.com. He covers a lot of ground and names names relative to his early music career, but besides an overarching, if unspoken, theme of the importance of believing in and staying true to oneself, the other big takeaway for me was his comments on this very subject. Here’s a bit of what he said about his songs:

“These songs didn’t come out of thin air. I didn’t just make them up out of whole cloth. Contrary to what Lou Levy said, there was a precedent. It all came out of traditional music: traditional folk music, traditional rock ‘n’ roll and traditional big-band swing orchestra music.

I learned lyrics and how to write them from listening to folk songs. And I played them, and I met other people that played them back when nobody was doing it. Sang nothing but these folk songs, and they gave me the code for everything that’s fair game, that everything belongs to everyone.

For three or four years all I listened to were folk standards. I went to sleep singing folk songs. I sang them everywhere, clubs, parties, bars, coffeehouses, fields, festivals. And I met other singers along the way who did the same thing and we just learned songs from each other. I could learn one song and sing it next in an hour if I’d heard it just once.

If you sang “John Henry” as many times as me — “John Henry was a steel-driving man / Died with a hammer in his hand / John Henry said a man ain’t nothin’ but a man / Before I let that steam drill drive me down / I’ll die with that hammer in my hand.”

If you had sung that song as many times as I did, you’d have written “How many roads must a man walk down?” too.”

He goes on to quote other songs and reference them to his originals. Traditional folk songs were his thing, and so that became part of his lexicon. It’s traditional country & blues that do it for me…and I learn and play these songs…sometimes to perform them, and sometimes just for me, and they undoubtedly influence my work…as do songs from other genres and contemporary artists whose work I respect.

So don’t be too self-important to pick up a fakebook or grab some charts or tabs from the vast collection on the interwebs. Don’t rob yourself of the education and perspective that learning these songs will provide. Play classics, play standards, play blues, jazz, country and pop. Play them as they were recorded, then figure out what they might sound like with your own spin on them. And finally, see what new cloth you might weave from familiar thread. 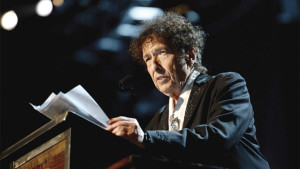