All or Nothing: The Power of Extremes

Welcome to For a Song. I’m your host, Cari Ray, and what a difference a month can make. When we were last together, a late batch of winter had blanketed our lovely little patch of dirt. Now that same soil is brimming with life…coaxed out of its den by the mischievous, smiling Sun. Of course, as an Indiana native, extreme swings of temperature and weather have to work pretty hard to impress me…but there were at least a few times in the last month that made even this weather-hardened Hoosier’s head spin. In fact, my good friend, and all-around Renaissance woman, Kara Barnard, recently penned a cartoon of my comments on the subject. It’s posted on my Facebook page as well as on the “For a Song” podcast page at cariray.com if you’d like a gander.

Now, where was I? Ah, yes, I was talking about extremes. Now, if there’s one thing good Midwesterners are clear about, it’s the danger of extremes. That’s right, we folks here in the middle of America like things…well, sort of down the middle. Right down the middle, actually…not too far one way or the other…not too much one thing or another. We’re a count-on-able lot generally speaking, and have the concept of “all things in moderation” down to a very predictable science…and for the most part, we like it that way.

But when it comes to songwriting, extremes are valuable tools. Been hurt? You could say “I’m having trouble picking up the pieces,” but why not say “it feels just like I’m walking on broken glass.” You might say “I’m having trouble forgiving you” but how about “Though I answer when forgiveness calls, my heart hangs up the phone.” And there are times when “I love you very much” just doesn’t quite cover it…sometimes you need to say “my love is deeper than the holler, stronger than the river, higher than the pine trees growing tall upon the hill. My love is purer than the snowflakes that fall in late December. Honest as a robin on a springtime window sill. And longer than the song of a whippoorwill.” Yup, I think that should just about do it!

When it comes to performing, people have asked me if I have to be someone else when I’m on stage. Well, some folks do that…have stages selves or alter egos. That doesn’t work for me because authenticity is a core value for me. But neither does being my everyday self…I have to be what I call a bigger version of myself. All of my natural ways of being are there…just amplified…much like my guitar is amplified. I think the same is true of writing songs. Keep in mind that in a radio-friendly song, you have 3.5 to 4 minutes to get your point across…so you had better amplify your communication. Get out of the middle of the road with your language…all of the fun is in the ditches anyhow. Be dramatic, use some flourish, exaggerate a little, go big or go home.

Sometimes I even use this as a test when I’m writing a song. If it sounds reasonable when I read it aloud, it may not be enough to work in a song…not one that moves folks anyhow. So here’s an exercise for you. Write a dramatic song, a ridiculous one, an angry one, a whiny one, a dirty one…or any other topic that you can take to the hilt. And go to extremes…use the most expressive language you can come up with. It’s good practice to get out of the language rut and improve your chances at writing those rare golden lines.

I’m Cari Ray, join me next time on For a Song… 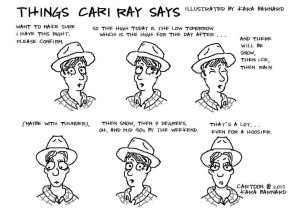